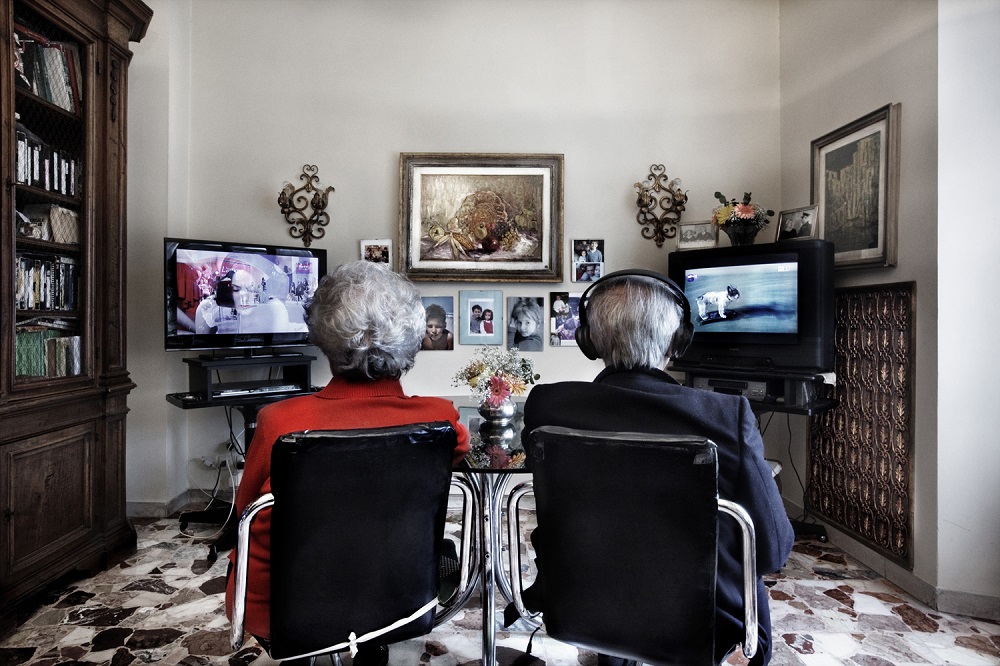 The world outlining in front of us requires to be explored by means of different artistic languages, in order to catch in depth the farthest frontier of reality. Italian photography of the last twenty years is renewing the approach on a reality in rapid growth, able to move away from the cliché of the past and to ripen new impulses finding in present-day the possibilities of expression exactly in the photographic tool. Irony and wrong-footing, communication strategies largely common among current culture, are those ones picked out by Giovanni Presutti in Dependency, photographic works reflecting on dependency as a mean of survival to contemporary life.
The author has a great synthesis skill that let him give a truthful picture of our society. He is able to make us smile in front of single images, but above all he fosters a careful and whole reflection on the man forced to take on a lot of different behaviours and the consequent habits, so that he lays his own weakness bare to us, his deep frailty that appears as his distinctive feature even if he doesn’t want to show it. The author can get to the heart of matter giving back information on who we are and on what characterizes our age. After all, photography continues remaining a tale of places, of persons, of continuous and systematic explorations around a reality in constant change.
It doesn’t matter whether he represents medicines or smoke or alcohol or the television, sex or shopping each of them has its own dependence, an obsessive tenure showing in a compulsive way that we must read as an alarm bell, the symptom of a starting unrest that flutters over the single man and extends over the whole society. However Presutti doesn’t choose a dramatic approach, he doesn’t want to emphasize the matter as it is common to some photographers of his generation. There isn’t rhetoric in his photos, his look is ironic but deep, amused but critic, the images are made up with a careful accuracy and exactness. When present, the colours are bright and modulated, able to lead the user’s eyes on the most significant aspects.
The language used by Presutti is similar to that one of fashion and publicity, he takes part in social discussion without that emphasis used by Oliviero Toscani in some of his famous photos, lacking in that desecrating style at all costs. He stages his dreams, his ideas and his nightmares as Maurizio Cattelan does in his editorial project Toilet Paper by means of Pierpaolo Ferrari’s lens. Giovanni Presutti likes enjoying himself with images creating, without fear, a connection between commercial photography and art.
Luca Panaro – Art critic – www.lucapanaro.net